skip to main | skip to sidebar

Bad grass among the good grass 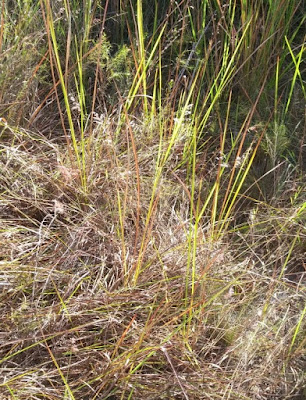 I began tackling a patch of cogon grass that I reported a couple of years ago but was apparently never treated.
I flagged the area so long ago that my original flag has faded from sunlight exposure.
Another flag at the former edge of the fire lane was recently mowed after a member in good standing of the Confederate Bushhog Operators Association.
The only plants that have died appear to have died of old age rather than herbicide.
The grass has been spreading slowly among the wiregrass and other native grasses, saw palmetto and sand pine.
The  walk into the cogon grass area began auspiciously.
A great purple hairstreak alit on a saw palmetto leaf. This was the first one I've seen here and one of the few I've seen in Polk. Despite the fact that its host plant is mistletoe, which is common, these butterflies are not that common.
Posted by Tom Palmer at 9:05 AM

I found the bushhogging had been more extensive than in the past, including some of the internal trails. Fortunately it occurred after the flowering season, so none of the endangered species were affected.

The mowing took out a good chunk of palmettos in the northwest corner, but fortunately missed a patch of Nolina brittonia that grows there that I didn't discover until a few years after I did the original plant survey.

What's a little mysterious is why a strip of tall grass was left in the middle of parts of the fire lane. seemingly defeating the purpose of the buffer.

I'll have to inquire with FWC to see what's planned.